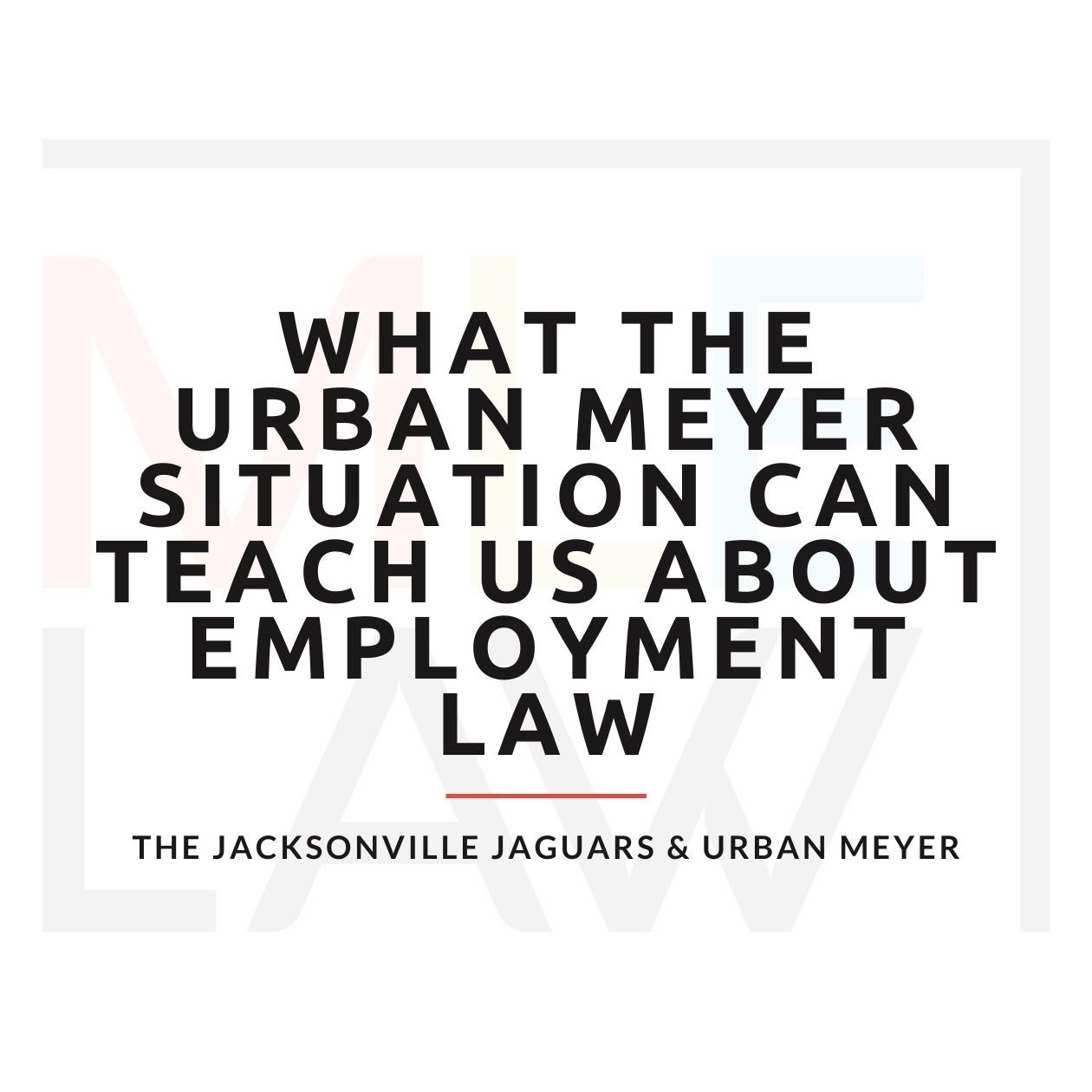 Urban Meyer is the current coach of the NFL’s Jacksonville Jaguars. While the details of Meyer’s contract are not public, reports upon his hiring were that the yearly compensation was in the neighborhood of $10 – $12 million per year.

Recently, Meyer decided not to fly home with his team from their Thursday night loss in Cincinnati (an unusual move for an NFL head coach). Instead, Meyer claims he was spending the weekend with family in Ohio. Footage from the weekend showed Meyer in a bar with what appears to be a young woman dancing on/near Meyer at an Ohio restaurant. Another video appears to show Meyer touching the woman’s backside. All this may not sound like a big deal, but for the fact that Meyer claimed he didn’t fly back with the team to be with his family. Additionally, as an NFL head coach, he was already engaging in unusual behavior by not being with the team after a loss. Making matters even more unusual, Jaguars owner Shad Kahn issued a strong statement regarding Meyer’s behavior, essentially blasting the head coach.

All this begs the question, if the Jaguars fire Meyer, do they have to pay him? The answer will largely depend on the specific language in Meyer’s contract (of which I am not privy).

Most NFL head coaches have guaranteed salaries in the event of termination for “performance.” Said another way, if the owner doesn’t like the direction of the team, he can fire the head coach, but he’ll likely have to pay the coach the balance of the salary due on the head coach’s contract. NFL coaches’ contracts also have a termination “for cause” provision. If a coach is terminated “for cause” the team would not have to pay the coach the balance due under the contract.

If I’m Jacksonville’s counsel I would take the following positions:

Regardless of the language in Meyer’s contract, the standard for establishing a “for cause” termination is generally very high. The same holds for violating a contractual “morals clause.” Without knowing the specific contractual language in Meyer’s deal, it’s hard to tell if either of the above arguments would prevail. That said, Jacksonville likely has a better case arguing that the termination is “for cause” based on Meyer’s deception. The bottom line is, absent serious personal issues, NFL head coaches are expected to be with the team at all times. Whatever Meyer was doing in Ohio, the video appears to establish he wasn’t with his family the entire time. Intentional deception is likely Jacksonville’s best argument that Meyer committed a “for cause” violation.

Michael Elkins is a nationally quoted, 20-year labor and employment and sports law attorney. He has provided commentary on sports and employment law issues to national media outlets such as CNN, Forbes, Newsweek, Bloomberg, Yahoo, The New York Daily News, and more.